Jewels and Junkies in British Columbia

Our trip to Canada was not all mountain wilderness.  We were lucky enough to see two great Canadian cities as well, Vancouver and Victoria.  After living amongst the pines for several months, they were the perfect injection of skyscrapers and pedestrians to satisfy our human interaction quota.  Vancouver offered stunning scenery and pop-up-restaurant cool along with a disturbing number of junkies making us wonder where the line between British Columbia and Narcos Colombia was.  Victoria was an absolute gem, plain and simple.  This smaller island city fully delighted and left us scouring real estate listings.

We arrived in Vancouver eager to like him.  After all, he already had one big advantage over other places we visited on spring break – Laurel.  Our good friend from Vietnam moved back to her home nation about a year before we/ I did.   It was wonderful and twilight zone-y to see her in such a different environment.  After picking us up in her car (not scooter!) she zipped us into the heart of Trendy City, to the pop-up restaurant event hosted by her twin sister.  Seeing as we are definitely not that cool, it was fun to observe the urban in crowd.  And so, so great to see Laurel and compare moving from third-to-first world experiences. 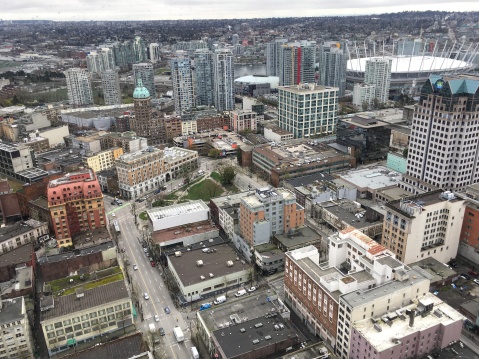 Vancouver weather did not cooperate on our trip but between rain patches we wandered Gastown, snuck into the coolest art deco building (inspiration for several comic book settings, we were told), visited the Lookout and Jimi Hendrix shrine, fumed at coffee shops too purist to carry decaf for the preggers among us, and made it to the seawall just in time for the sun to come out.  We did those exotic things one does when emerging from countryside isolation like listen to live music (!), drink mocktails at a jazz club late at night (!), shop for blue jeans (!) and decide where to eat based on which kind of ethnic food we craved instead of what was open (!).  It was delightful to be semi-dressed up just because and stumble across public art displays.  In so many ways Vancouver is such a great -if expensive- city.

But then there were the junkies.  It probably didn’t help that our hotel was near a clean needle center.  It seemed the city was semi-post-apocalyptic.  The number of humans off their heads on drugs gave the impression a zombie invasion was nigh.  The opioid epidemic plaguing the Pacific Northwest has definitely oozed its way over the border.  Even in trendy (read: expensive) areas the druggies, junkies, and down-and-outs occupied a surprisingly significant amount of pavement space.  The two most disturbing were the heavily pregnant woman who gestured to my stomach and then her own in a show of comradery and the kid who could easily have been my students’ age rocking back and forth in a doorway while his older junkie mentor coached him on best injection techniques.  The experience made me question when society’s empathy towards addiction becomes enabling.

Victoria left no such uncomfortable questioning.  Victoria was simply fabulous.  Having visited in October with my family, I was cheerleader excited to show it off to JD.  Victoria may just be my favorite city.  Yes, I mean it.  It combines the exposed-brick history of a former industrial town with high-tea fancy and makes you feel you’ve arrived in a less expensive, more charming London.  Victoria impressed with her rum runner dark past, her craggy shoreline and flippin’ beautiful everything.  We had such a blast in her Irish pubs, Mexican restaurants, quaint inn, and charmingly walkable neighborhoods.  Victoria is the best, best, best.

Vancouver and Victoria showed us different sides of Canada.  While it’s easy sometimes to lose sight of Canada’s complexities in the stereotypes of maple syrup-y niceness, our visit made me further appreciate her nuances and wonderfuls.  The jewels and junkies of BC made for one epic trip.