The caves were a-callin’.  For years JD and I had heard about, and been interested in, the Phong Nha caves.  The world’s biggest network of nearly untouched caves surrounded by dense jungle and Ha Long Bay-esq dramatic mountains, with a sprinkling of indigenous tribes sounded too exotic to resist.  So we didn’t.

The journey into romantic Livingstone-style exploration (?) began as it should – with trains.  The afternoon train from Da Nang to the middle of nowhere was lovely, once we pushed and pawed our way through the thick crowd of others looking to take advantage of the long holiday weekend.  In quite the jolly (snobby?) mood we opened a bottle of wine en route to celebrate going to explore an area that friends back home didn’t know existed.

We arrived at a nothing town but were quickly pulled back into the fairytale when we made our way to Phong Nha Farmstay.  Surrounded by neon green rice paddies and iron rod lanterns, it evoked every sense of nineteenth century colonial deliciousness.  I could have stayed there for the whole trip. 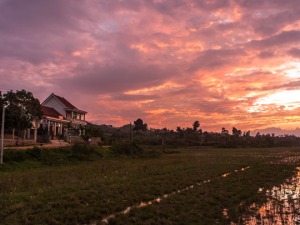 ‘Twas not to be.  Early the next morning we were up, out and headed into the world’s second biggest cave, Son Doong.  Only opened to the public a few years ago, strict conservation laws limit tourism to 15 a day – exactly the size of our group, plus the porters who time and time again mocked my struggle by nimbly leaping up and down rocks like ballerina gazelles.

We met with our Oxalis group and loaded on to the van that would take us as far as it could before our on-foot trek to the cave began.  Along the way JD and I commented repeatedly that it was the scene from a war movie; bush so thick it could be hiding anything – or anyone.  Our army style hiking boots added to the effect.  Even more so was the rain; all of ten minutes in to a day-long hike the clouds decided they didn’t like us and let rip.  This was no pitter-patter drizzle.  It was flash-flood, flash exhilaration mayhem that kept up for over six hours.  I loved it.  The steam from all of our not-so-good-smelling bodies filled up a local house when we stopped for lunch in an indigenous village.

The village could easily have been the final destination of the trip.  What with only a handful of  remaining members who are quickly trading in their isolation for the badminton net and DVD player that was used as decoration (that tour guides bring along with guests), it was not just a trip back in time but a trip down the rabbit hole.  I was especially interested in the village school.  Our tour guide, also an indigenous tribe member (but from a much more cultured tribe, she told us), explained that the Vietnamese government can’t persuade teachers to live in the village  – mind you, where there’s no electricity, water and you’re a six hour trek to the nearest primitive town.  And yet, the government is obligated to provide a teacher.  Solution: hire many teachers on two-week rotations and offer them the best accommodation the tribe has.  I took a look at this hotel.  Cows back home would’ve balked.  With a bucket and cutting board making up both kitchen and bathroom, the rest was a dirt floored area smaller than a horse stall with flimsy wooden boards coming up about chest height for walls.  Two weeks would be pushing it for me.

Our time there ended and we waded on through leech ridden streams and glorious gray green mountains to a looming black hole, surely the opening to hell.  Rather, the opening to our cave.  And, as though God and Satan were having a stand off, the formidable black abyss was filled with delicate butterflies, maybe 200.  Someone has a sense of humor, or has not yet won the war.

Into the blindness we went as seers, thanks to helmet torches.  Up, down, all around through a rocky labyrinth we then made it to the promised land.  The eye of the storm was a 100 m high cavern of wonderful cave, complete with white sand beach along its river and encroaching jungle through the rock falls.  That night we celebrated with the world’s largest shadow puppet show on the cave ceiling.  Wolf  howls and echo calls welcomed.

Exploring farther the next day we found Never, Never Land. Really.  The exit of the giant cave contrasted the grumpy dark interior with the sun-streaming-through-plant-leaves exterior along with thousands – THOUSANDS – of flying swallows.  We were told it’s where “they” want to shoot the Never, Never Land scenes for a new Peter Pan movie.  Good on ‘em, however they found this place.  How they’ll get their camera equipment remains a mystery. 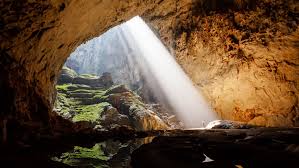 I’m rambling on, thinking you’re a turn of the century audience who doesn’t mind reading a dozen adjectives before getting to the punch line: It was great!

After Son Doong, we had an incredible series of day trips to the Dark Cave –so much mud!- the national park, complete with an oddly elevated obstacle course, riding bikes through the least bike-friendly paths ever in order to find The Place with the Cold Beer – and tubing, shrieking in the cold river all by ourselves, quite sure to be the first ever South-Africans and Michiganders to see those particular bends in the brook.

It was meant to be a parentheses trip; a smaller trip between the Philippines and Africa.  Instead, it held its own and left us with butterflies, dense jungle and dark caving.