It hit me the moment I found myself wedged between an orangutan and an American flamingo in the middle of the Hong Kong botanical gardens: this is a city unlike any other.  To sum up Hong Kong in one word it is Big. Huge. Humungous. Enormous. Colossal.  Take your pick of fancy words that equal “big”.   Is it overwhelming?  Of course, but when you embrace this floaty sense of being overwhelmed it is absolutely incredible.  Hong Kong is the definition of Big City.

Our trip to HK began in a whirlwind when recent political tensions made way for reduced air fares from Da Nang, Vietnam.  Just so happened this unfortunate fortunate turn of events overlapped with JD’s 30th birthday.  It was a match made in random Asian heaven.  We were off!  With little research (or even packing) we suddenly found ourselves touching down in the middle of Asia’s World City (what does that actually mean, billboards?).  We had two and a half days to explore, experience and run screaming into a new decade.  What fun!

Immediately Hong Kong surprised me.    Firstly, she’s Chinese.  Really Chinese.  After my futuristic experience in Singapore a few months ago, I assumed that Hong Kong would likewise be a shiny, gleaming cosmopolitan empire that just happens to reside in Asia.  Not so, Comrade.  Alongside new skyscrapers were recently skin-scraped pig heads.  Between Gucci and Armani was the obligatory Asian market of all things junk and plastic.  Everywhere was noise, signs, bargains, traffic and people, people, people.  In our first 24 hours in HK we walked 24 miles through crowded streets, more crowded markets and the epicenter of the manmade world.

As the sun set a new Hong Kong rose.  This was the one seen in movies and postcards.  Here were the glittery lights and twinkle of cosmopolitan cool. But here, also, was a surprise.  While many cities have impressive, even daunting, skylines they all have a beginning and end point.  Hong Kong, on the other hand, is a skyline that doesn’t stop.  Its geography of steep surrounding hills and multiple islands have pushed Hong Kong development into a relatively thin but long strip of land on both sides of the water, making Hong Kong appear to continue on and on in every direction.  Left, right and even behind you there is city; skyscrapers in such abundance that we questioned the definition of skyscraper – surely a city is only allowed so many?  Not so. Hong Kong flashes its height and its expanse in unabridged magnificence.  I was humbled by my smallness as if standing before some neon deity. 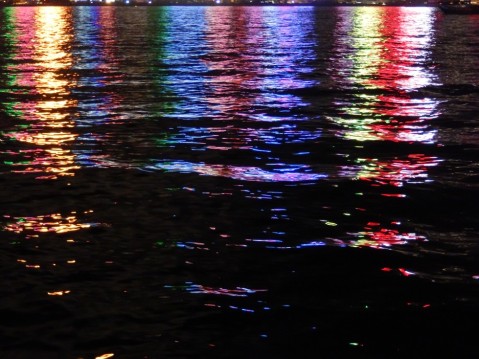 The next day we stayed on Hong Kong Island, the more business/international area so far as I could naively tell.  Here was the movin’ shakin’ skinned pig-less city I had originally expected.  But here also was a botanical garden featuring both a monkey and exotic bird exhibition which sandwiched me between the very non-Chinese animals mentioned before.  Here, for once, was a breath of space in an otherwise tunnel vision city. Hong Kong may be the heart of the world, but its incredible amount of tall, dense building keeps you from seeing anything more than the concrete immediately next to you.  Only at the water’s edge, at high elevations and in the park was there enough clearing to appreciate the magnitude of the greater surroundings.

It was on Hong Kong Island that JD and I found Hong Kong Night Life. After riding a 2 kilometre long outdoor escalator through neighborhoods, holding on tight in the world’s steepest trolley car and realizing that, yes, every city in the world does have a Soho area, we found ourselves in an international car crash of immaculately quirky restaurants, bars, and boutique stores.  In the space of a block you could choose between fancy pants restaurants, hookah lounges and thousand dollar purse stores.  Although it was only a Wednesday night the town was just coming out when we finally headed back to the hotel at midnight.  In our time walking around we ate Mexican nachos, stopped by a British pub to check the soccer score, listened to a live Caribbean band, swirled French wine with great pretension and gossiped about our days in NYC at an ambiguously cool fusion restaurant.  We left our dim sum behind and stepped into an international quarter that can only exist in outrageously large cities.

Hong Kong is a mind trip of the most extreme.  It is the most amazing, the most surprising and, above all, the most vast.  Hong Kong is whoppin’ big.