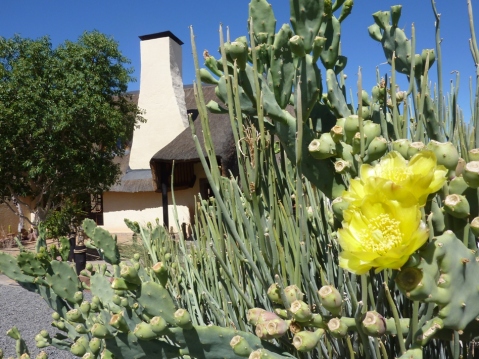 Life is full of surprises.  One of the nicest it’s thrown my way lately was Vogelstrausskluft Lodge.  Buried beneath the slew of letters that create the longest name I’ve ever mispronounced, there is an incredible place to stay in Namibia.

The main draw for Vogelstrausskluft is Fish River Canyon, one of the most awe inspiring and underrated places to go travel on Earth.  It’s the world’s second largest canyon – only the Grand Canyon is bigger.  At 161 kilometres long it’s not for ants, as South Africans would say, although I still don’t really understand that expression.  About half the canyon is a nature reserve and the other half is privately owned by less than ten farms.  We’re talking Namibian farms that are more than just a few acres.  The Vogelstrausskluft farm makes up a good chunk of this privately owned half, which means you pretty much will have the Canyon to yourself.  In the whole time I was there I saw exactly two other people – my boyfriend and our guide, Pieter.

The Canyon, itself is wild, rugged, wonderful African bush with all the animals, rock formations and heat you’d expect.  The highlight is the gorge through the middle that houses Fish River.  The gorge seems to rise, or rather, fall out of nowhere.  I was within a few meters of the edge before I realized it was there.  But once you realize it’s there, boy, do you realize it’s there!  The land cuts away to one of the most dramatic views I’ve ever seen.  The river below seems so, so far below and continues on for as far as you can strain to see.  And all around you there is…nothing.  No houses, no roads, no lights, no noise.  This is a private party for You and Africa.  It’s nothing short of staggering.

There were four things that made Vogelstrausskluft so special, and they turned out to be the lodge’s motto – friendliness, flexibility, cleanliness and good food.  The people who run Vogelstrausskluft lodge, farm and camp site are not just polite friendly, they’re genuine friendly.  The managers, Pieter and Suzanne, wowed us from the welcome orange juices that awaited us, to the custom braai packs (that’s BBQ, my fellow Americans!) they put together and sent down to our campsite.  That’s right – I said campsite.  Despite the fact that we weren’t staying at the lodge we were treated like VIP guests.  We were encouraged to use the lodge pool, lounge, gardens… We were even invited to share a braai with our hosts on Easter Sunday.

We had the pool to ourselves.

Vogelstrausskluft has a whole list of activities for guests from game drives, to full day Canyon exhibitions.  My boyfriend and I quickly learned the options don’t stop there.  We were treated to an unforgettable experience when we joined Pieter to assess the lodge’s water pump in the middle of the Canyon.  What was meant to be an hour or two out in the bush became a whole day event, complete with tracking leopard, swimming in the river, sharing a cold beer for Easter breakfast and driving the most exciting (read: harrowing) non-road in Namibia.

In Fish River Canyon, this is a road.

As we headed back to the lodge Pieter explained they’re busy organizing a five day hike through the Canyon for thirty school children.  School children?  That’s right.  Suzanne told us later they’ve arranged week long hikes, overnight camp outs and guides for people aged ten to seventy.  They even offer an ice service – cold ice delivered to you in the middle of nowhere as many times as you’d like. Considering that Namibia can get as hot as 55 degrees Celsius in the shade (130 degrees Fahrenheit), ice is worth its weight in gold.  And if they don’t have a package that works for you, they let you make up your own. 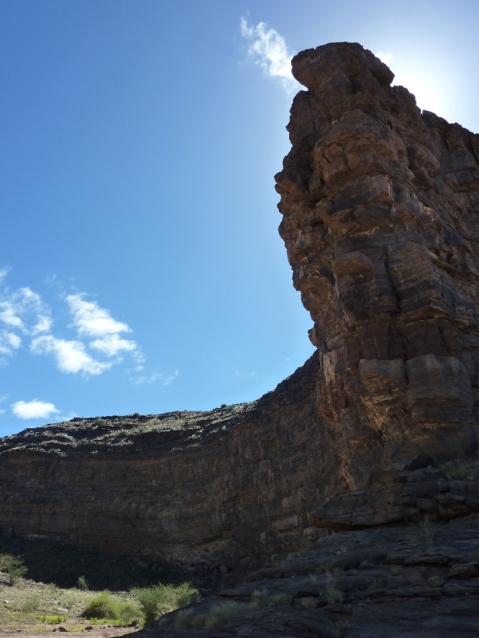 The lodge is gorgeous and incredibly unique – there’s an entire tree in the bar to give you an idea.  The campsite had breathtaking views of desert, desert, desert and just behind it is an awesomely private gorge to explore (complete with sand dunes, caves and enormous parakeet nests!).  Everything from the fire pit to the bathrooms is kept immaculately and there are even electric lights tucked into the trees at each campsite to break up the night.

Not that you necessarily want to turn any lights on.  Other than Fish River Canyon, the area’s most famous draw is its stars.  Just like everything in Namibia, stars come in the extreme.  Even with a full moon blazing, there were stars and stars and more stars to see at night.  Shooting stars, big stars, little stars, twinkly stars and bright stars.  With no city, town or even neighborhood nearby to interfere the stars are free to let loose at night.

From the moment we arrived to the moment when we sadly had to leave I was blown away with Vogelstrausskluft.  Consider checking them – and checking out Fish River Canyon – when you’re ready to go travel Namibia.