Thanksgiving as an Expat

Becoming an expatriate is often the result of travelling.  You find a place, fall in love with the scenery (or, in my case, a cute guy with a foreign accent) and suddenly find yourself putting up curtains in a new home overseas.  You experience excitement, confusion and frustration, often at the same time.  You meet new friends, miss your old ones and learn to balance the complex relationships you have with both of the countries in your life.

Not a sight you'd see in Michigan.

When you’re an expat you often try to overcompensate for your newness by clothing yourself in local pop culture and obscure trivia.  People fight to have me on their team for the South African version of Trivial Pursuit.  I can name all the actors on Isidingo and talk about the 1806 Battle of Blaauwberg.  These are things that no real South African bothers about.  But, being obnoxiously over eager to earn my African stripes, I make it my mission to glisten with useless facts of the Rainbow Nation.

As an expat you’re keen to distinguish yourself from the tourists passing through.  You want everyone to know that you-live-here.

On the flip side, your home, the place you were born, will always be your home.  This is a hot topic surrounding the nature of emigration.  People may argue that you should identify yourself solely with your new-found country.  But sometimes that’s just silly.  In my case I’ve lived in South Africa a whopping 20 months.  I lived in the USA more than 20 years, which seems even longer when you consider that that’s three quarters of my life.  My family, most of my friends, even my dog are still living in the land of the free, home of the brave.  I have the strongest American accent known to man and a passport with a very regal looking bald eagle on the inside cover.  The USA is still my home.

Becoming an expat can increase your risk of having extremely bad or the extremely good days.   You hear horror stories of your home country going to war with your adopted country or calling each other’s food ‘freedom fries’ and ‘idiot cheese.’  But you also gain the opportunity to celebrate two independence days, make two unique groups of friends and become comfortable in two very different ways of life.   You could say it’s like having two children instead of one, but since I don’t have children let’s say it’s like having two dogs instead of one.  Your love doesn’t split in half when you get a second dog, it doubles (if you haven’t already guessed, I really like dogs).  Of course you also double the amount of slobber and chewed shoes by having two dogs, but you get the idea.

And then there are days, like today, when being an expat isn’t extremely good or extremely bad, but can make you a little homesick.

It’s Thanksgiving today back home in the US.  Thanksgiving is one of the truly nicest American holidays.  Ok, so there may have been a less than happy ending for the Native Americans who made the first Thanksgiving possible, but that’s a different story for a different time.

On Thanksgiving there’s no commercialized Santa or freakishly oversized bunny to distract you from the people sitting around your supper table.  It’s a day where you watch too much (American) football, eat too much food and give thanks for your family and friends, while secretly gossiping about all of them behind their backs.  In short, it’s wonderful.

And while my American family slices up the turkey in a hemisphere far, far away I’m sitting in a regular old South African Thursday.

When you’re here, you’re not there which means as an expat you inevitably miss out on certain things you’d like to be there for.    You forget for a moment about all the wonderful sights you’ve seen, people you’ve met and adventures you’ve had in your new home away from home.  You ignore the fact that this is the life you chose; the one you’re happy 51 weeks of the year to be living.  And you wallow for a minute in homesickness.

But as soon as you admit that out loud (or in a blog) you realize your self-pity is not warranted.   You remember that you’re lucky to be exactly where you are, doing exactly what you’re doing.

You remember that you’re grateful you chose to become an expat, if only temporarily.   So whether you’re in Detroit, Cape Town or Timbuktu, happy Thanksgiving! 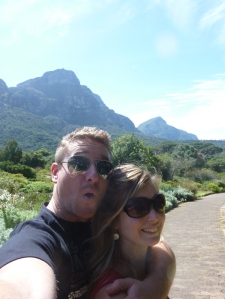 He's worth the move.

6 responses to “Thanksgiving as an Expat”